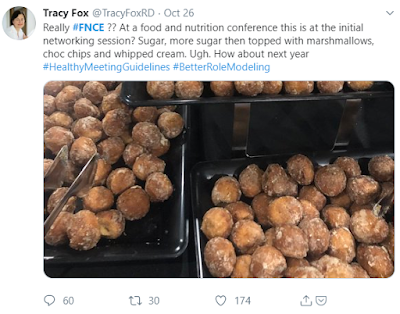 Lots of hoopla on nutrition Twitter this week because RD Tracey Fox questioned the wisdom of serving donuts at the Academy of Nutrition and Dietetics (AND) annual Food and Nutrition Conference and Expo (FNCE).

Hyperbole and fallacious arguments from both sides ensued.

The people hating on the donuts predictably likened sugar to *checks tweets, sighs* heroin and cigarettes, while the people defending them, their arguments are probably fairly summed up in this tweet:

It’s these arguments that I want to very briefly address.

As I’ve written before in reference to a physician conference I attended where they were serving soda, Clif bars, and potato chips as a snack, human beings, including MDs and RDs, when faced with freely provided indulgent choices, tend to choose them, and I can’t help but wonder had they not been offered how many RDs would have gone for a donut or cookie run?

And of course it’s not “just one“. We are all constantly faced with indulgent choices being offered to us freely to christen every event no matter how small, and we’ve created a food environment whereby we have to go out of our way to make healthy choices and to actively, regularly, say no to indulgent ones. Now I think indulgent choices are part of life, an enjoyable part at that, and ones that I even actively encourage my patients to make, but I also think it would be in everyone’s best interest were that food environment reversed, where the healthy choices are the defaults and indulgent choices are readily available for anyone who wants to go out of their way to get them.

And by the way, at FNCE this year they were certainly readily available. The decadent Beiler’s Bakery was 92ft away from the Pennsylvania Convention Centre, while more pedestrian Dunkin’ was 135ft away. 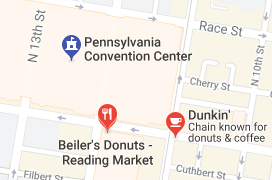 Yes, the constant provision of junk food is a societal norm, but it certainly need not be.

And honestly, if even the Academy of Nutrition and Dietetics enables and encourages poor dietary choices at RD events, why would anyone expect better from others?

Until we stop leaning on the theoretical ability of people “just saying no“, or that the provision of healthy choices somehow erases the provision of junk, as the primary means to address a food environment that incessantly offers and pushes nutritional chaff at every turn, we’re not likely to ever see change, and frankly this is a charge that AND should be leading.