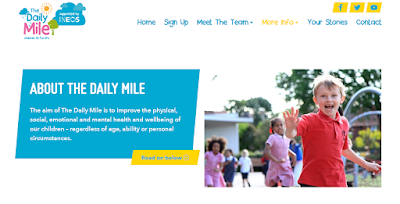 Published this week in the International Journal of Obesity is Effectiveness and cost-effectiveness of The Daily Mile on childhood weight outcomes and wellbeing: a cluster randomised controlled trial whereby researchers reported on the impact a school year worth of 15 minutes of daily running had on children’s BMIs.

It’s an odd study in that we’re talking about 15 minutes of running per day which literally no one should expect to have a marked effect on childhood obesity given both math (15 mins of children running, jogging, or walking a mile probably doesn’t even burn the calories of a single Oreo) and the fact that multiple meta-analyses have shown that even far more involved school based PE initiatives don’t have an impact on childhood obesity.

It’s also odd because The Daily Mile itself doesn’t tie itself to weight,

“The aim of The Daily Mile is to improve the physical, social, emotional and mental health and wellbeing of our children – regardless of age, ability or personal circumstances“

And it’s a problematic study in that consequent to the wholly predictable non-exciting outcome, it’s the sort of study that might be used as a means to discourage the program’s continuation.

What might have been studied instead? How about the impact of the Daily Mile on marks, concentration, endurance, or physical literacy (note, they attempted to do some of this, but data collection was too poor for them to make many conclusions), or if there was a strong desire to tie it to something medical, how about blood pressure, heart rate recovery, mood, sleep, or lipid levels?

As I’ve said many times, dumbing down exercise to weight management shortchanges both the benefits of exercise and the realities of weight management, and frankly doing that in the name of a program that sees kids running an extra 15 minutes a day, and then seeing that published in a credible journal, speaks to just how pervasive and dangerous that practice is.