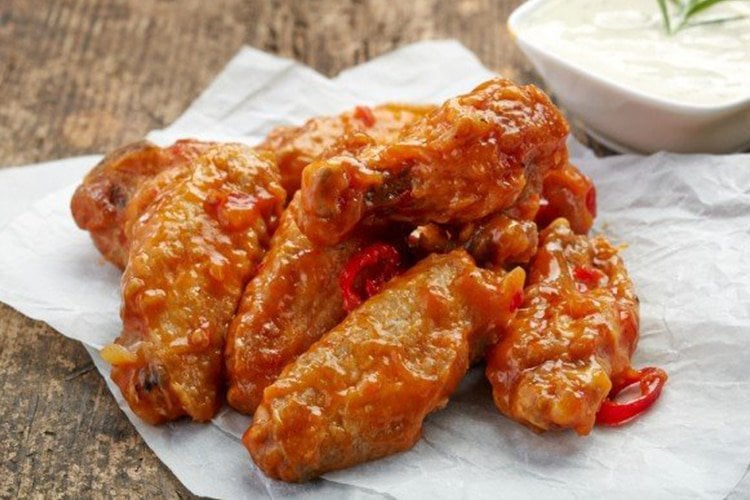 And we make the sauce from the same: [sauce] (https://skinnyms.com/skinny-ms-wing-sauce-3/)

They turn out great.

A couple of notes:

Wings: We also have cooked the wings on the grill instead of the oven. They get nice charred bits around the edges that we like.

Sauce: We use “the boat motor” (immersion blender) on the sauce to smooth it out instead of running it through a sieve. We also use less honey than called for because we like it less sweet.

We used the recipe from here: [cookpad] (https://cookpad.com/us/recipes/1477332-fried-chicken-with-maseca) Corn flour, salt and pepper. That’s it. no mixing flour blends, no gums, nada.

Super easy and tasty. They are fried in oil, so it can be messy, but really really tasty and a great fried crunch that we have been missing. We thought it was a bit too salty, we’ll use less salt next time.

For those that don’t know: Maseca is a brand corn flour. The term is “Harina de maiz nixtamalizado” or “Masa Instantanea de Maiz” Comes in while, yellow or blue.

If it easily available in supermarkets in the Seattle area, and I would imagine anywhere that has a significant Latino population. Available on [amazon] (https://www.amazon.com/Maseca-Corn-Flour-4-4-lb/dp/B00ZQMR7L2/ref=sr_1_1_0o_fs?almBrandId=QW1hem9uIEZyZXNo&dchild=1&fpw=alm&keywords=maseca&qid=1586795555&sr=8-1)