This cozy vegan pot pie is made with tender veggies simmered in savory herbed sauce and baked up under a flaky pastry crust. Tastes just like classic chicken pot pie, but this one is totally meatless and dairy-free! 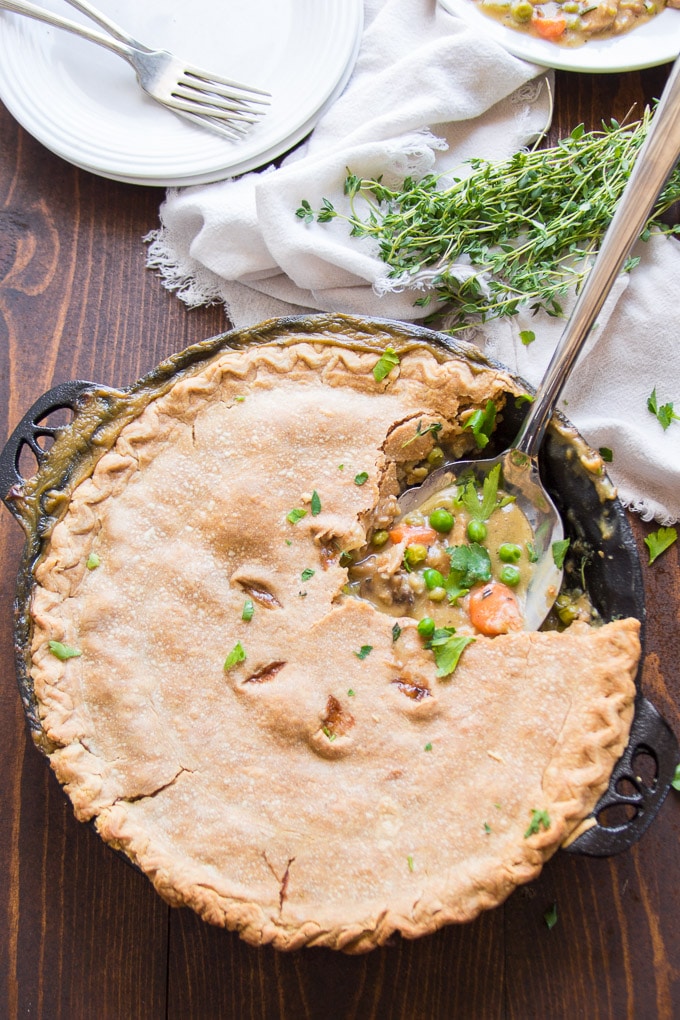 When my husband and I first began dating, he was really interested in my cooking and made frequent requests, usually for vegan versions of his old, non-vegan favorite dishes. This is actually a big part of what got me started blogging. (Thanks hubs!)

Some things I tackled right away. I was all about the Reuben sandwich, so much that I’ve blogged four versions of it. Others took a bit longer. I was never a big fan of meatloaf, but eventually figured out that I love it when it’s vegan.

The idea of making a vegan chicken pot pie took a little while for me to warm up to. I think I only actually ate chicken pot pie once when I was kid, and I guess I wasn’t that impressed, because I did give up meat and all by the time I was thirteen.

Finally, after six years of blogging, I decided to give it a go. And I think I did a damn fine job! 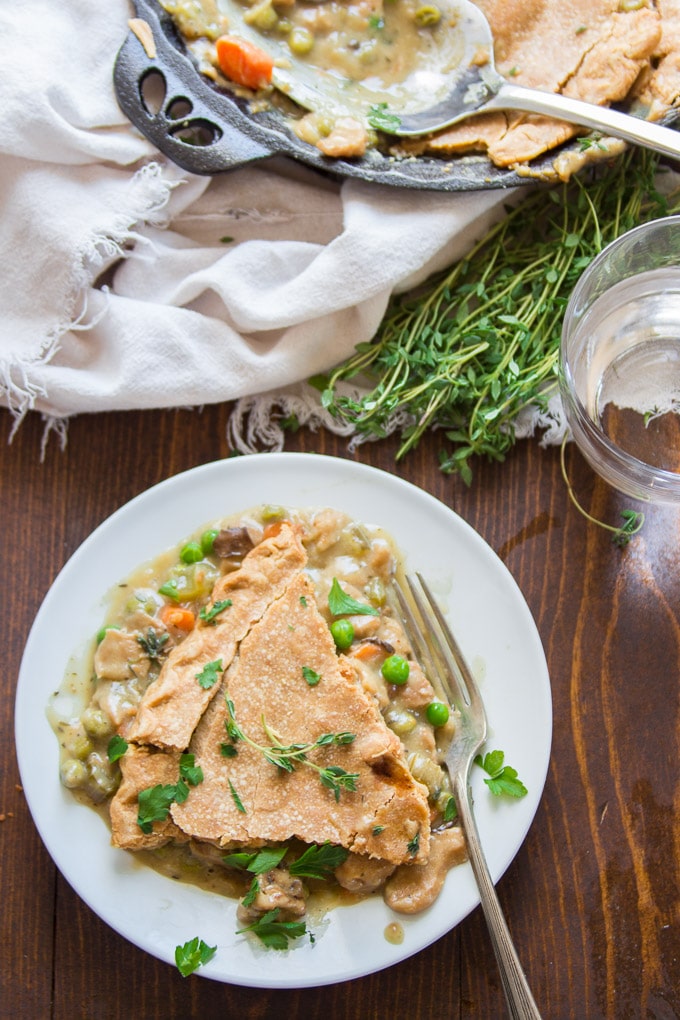 Veggies, herbs, creamy gravy and vegan chicken, in the form of mushrooms + seitan, all baked up under a flaky crust go into this pot pie, which, my husband tells me actually tastes better than the pot pies he used to eat before giving up meat.

How to Make a Vegan Pot Pie Filling

The mushrooms should be sautéed by themselves in a bit of oil. You can either do this in a separate skillet, allowing them to cook while you get started on the veggies, or you can cook your mushrooms first and then remove them from the pot before you start your veggies. Save dishes or save time — it’s up to you!

Next sweat some onions, carrots and celery in a pot with a bit of oil. Once they begin to soften up, add some garlic, then add you seitan and return the mushrooms to the pot. 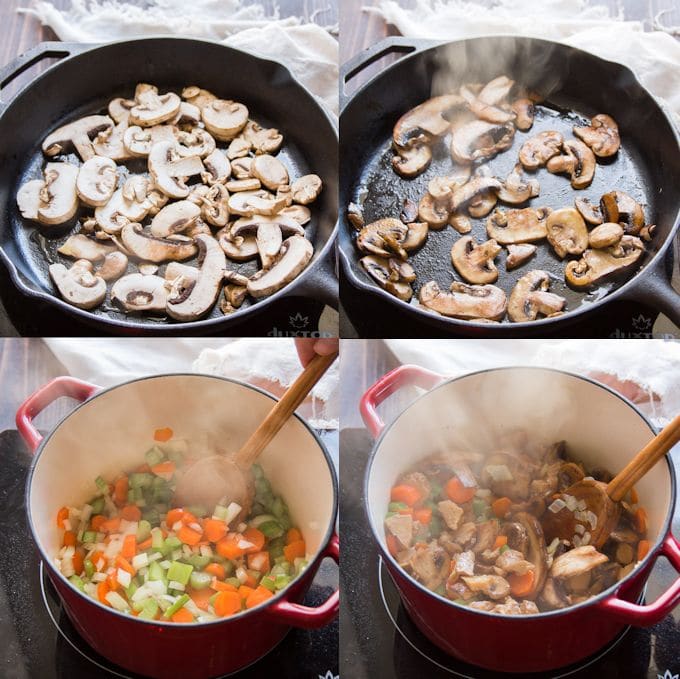 Sprinkle in some flour. This is your thickener. Make sure to add it slowly and stir everything in the pot to distribute the flour. Give it a minute to cook, and then add some white wine. Bring the wine to a simmer — it should thicken up very quickly and coat the veggies. Let it cook just a bit to reduce, then add your broth, non-dairy milk, herbs, and seasonings.

Let everything simmer until the veggies are soft, and then stir in some thawed out frozen peas. 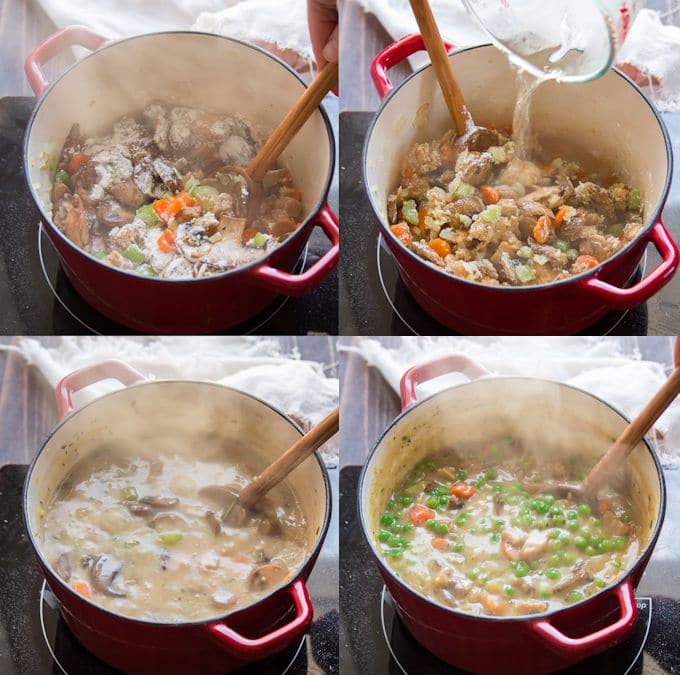 Ladle the filling into a large pie dish or casserole dish. Arrange a pie crust on top and pinch it around the edges of the dish to form a seal, then cut some slits in the top for ventilation. 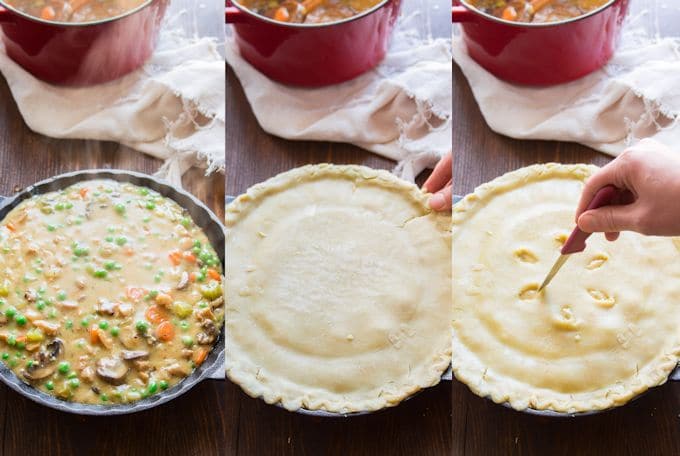 Bake the pie until your crust is golden. You’ll probably see some filling bubbling up around the edges by the time it’s done! 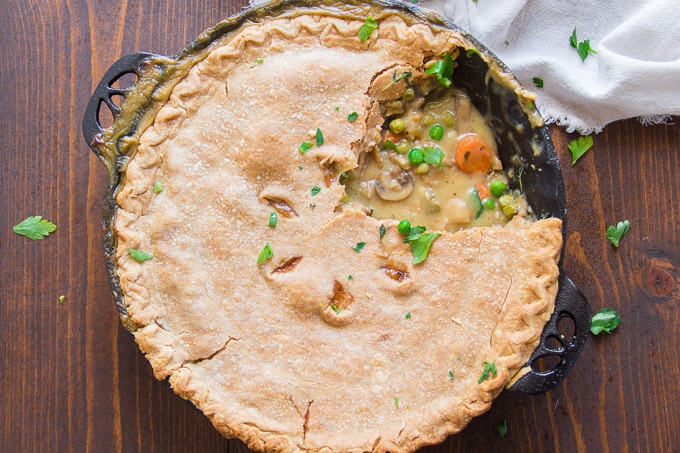 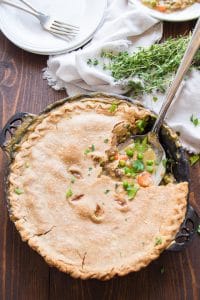 This vegan chicken pot pie is made with tender veggies simmered in savory herbed sauce and baked up under a flaky pastry crust!