People with psoriasis should avoid certain ketogenic diets, scientists who studied its impact on mice have warned.

The low-carb, high-fat diet has grown in popularity in recent years, as research suggests it could help with maintaining a healthy body weight, and control blood sugar levels.

The authors of the new study published in the Journal of Investigative Dermatology highlight it is also thought to have anti-inflammatory properties. Keto has therefore piqued the interest of dermatologists who treat conditions like psoriasis: a chronic autoimmune disease that makes skin cells grow faster than normal. Past research has suggested saturated fat could worsen the symptoms of psoriasis, which causes patches of thick, red skin and scales to develop on the body.

Most followers of the keto diet get up to 30 percent of their calories from protein sources and limit carb-heavy foods to less than 50 grams day—the equivalent of two medium apples. This puts the body in a state of what is known as ketosis, where fatty acids called ketones are produced and used for energy instead of carbohydrates.

The authors of the study, published in the Journal of Investigative Dermatology, investigated how the ketogenic diet might affect mice with a condition similar to psoriasis.

The team put the rodents on an extreme versions of the keto diet—usually only followed by those with treatment-resistant epilepsy. They featured 77 to 80 percent fats, 15 to 25 percent proteins and only 5 to 10 percent carbohydrates.

Researchers found animals who ate a foods heavy in what are known as medium-chain triglycerides (MCTs), particularly when paired with omega-3 fatty acids, saw their skin worsen. Foods like coconut oil, dairy products, and palm kernel oil contain relatively high levels of MCTs, while omega-3 is found in fish oil and foods like flaxseed, chia seeds, and walnuts.

But a well-balanced ketogenic diet featuring mainly long-chain triglycerides did not appear to worsen the skin. These foods include fish, nuts, avocado, as well as olive and soybean oil, and meat.

“I think most people following a ketogenic diet don’t need to worry about unwanted skin inflammation side effects,” he said in a statement. “However, patients with psoriasis should not consider a ketogenic diet an adjuvant therapeutic option.”

The study follows a separate piece of research published in the journal JAMA Dermatology earlier in the week which suggested people with psoriasis could be at greater risk of developing or dying of cancer.

Alex Trafford, co-author of the study in the pharmacy department at U.K’s Manchester University, told Newsweek on Wednesday: “As with people without psoriasis, making healthy lifestyle changes might lower the risk of cancer.” 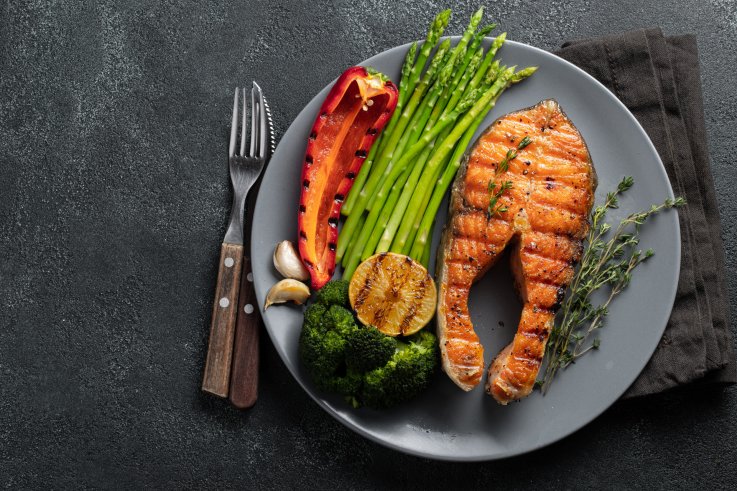 A stock image shows a salmon steak with asparagus, broccoli and red pepper on a gray plate, which could be eaten as part of some ketogenic diets. Getty